Here's What You Missed at Independent x Influential 2015 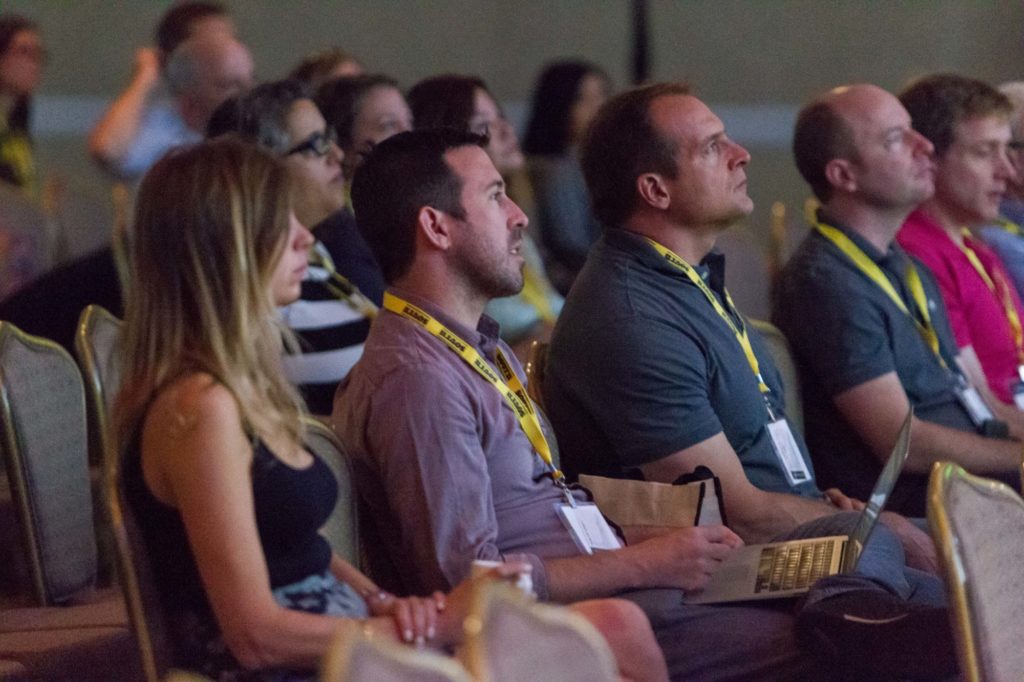 Wednesday, September 9th was the maiden voyage of the Sovrn Independent x Influential Publisher Summit, or i². The event brought together speakers from far and wide – from NYC to the UK and Taiwan – to take the stage at the Fairmont Hotel in San Francisco and bring us their perspectives, strategies and secrets for content creators in 2015. From their talks we’ve put together this need-to-know list of the top takeaways and trends from i² 2015.

It’s no surprise that the problems of early publishers (think pre-1960) are vastly different than those of the modern day content creator. But the story of how we got here is more fascinating and probably more complicated than you might think. The crux of Ben’s “Aggregation Theory” is that three key internet-driven phenomena pushed us to the current state of content creation, distribution, consumption and subsequently, monetization. They are: new media in a zero sum game, infinite competition and new differentiation. Essentially when there is limited ad spend and unlimited ad inventory, there is no money to be made. Maybe unlimited options, whether it’s inventory for both buyers or differentiation strategies for publishers, isn’t always such a great thing. So how are publishers in the era of the flood to stay afloat? The solution is three-fold: better (smarter) buying, better targeting and better tracking.    In a sentence: be an expert at finding the needles in the haystack. Easy, right?

Talk about a meeting of the minds! John Battelle (Wired, Federated Media, NewCO) sat down on stage to interview Ev Williams (Blogger, Twitter, Medium) and let’s just say that he left no stone unturned. Their conversation ranged from the future revenue strategy for Medium and their plans for bringing brands into the picture (Marriot is one of few brands already publishing on Medium today), the “dark arts” of Facebook and their monopolization of content distribution, right down to Williams’ personal reflections on the state of Blogger and Twitter since his departure. Williams beat around no bushes when it comes to the challenges publishers are facing and will continue to tackle as Facebook and other platforms (perhaps Medium is in that mix now?) further encrypt their secrets to discovery. But while some of his postures were bleak at best – see Forbes article titled “Medium’s Ev Williams to Publishers: Your Website is Toast” – he was optimistic about the potential for publishers to share their voice and ideas through online content.

“You will have an audience that you will build with voice and POV. That doesn’t go away. It gets better.” @ev#isquared2015

Williams also had a strong reaction to questioning from Battelle about the current advertising ecosystem. Williams: Native ads are the only thing that can work. Other stuff hasn’t been a win-win especially for users. It’s on its last legs. I’m not saying you’re done. It’s not tomorrow. But everybody knows the banner on the web page is not going to be paying your bills in five years. Not a video or a takeover either. Battelle: Isn’t there some value in connecting the right advertiser with the right group of people? Williams: But Facebook will do that. It’s just not going to be on your website. Yikes. And my personal favorite moment from the interview… Battelle: What do you think of Blogger as it is today? Williams: It kills me… Blogger was the first company Google ever bought. They didn’t kill it. In that era, thousands of small companies went to big companies.. and got shut down. I appreciate that, though I was frustrated the whole time. But there was a period of a year after I left when it didn’t even have a product manager… even though it was the biggest site on the Internet. Battelle: What’s going on with Twitter? Will it be fine? Williams: …Everything’s going to BE fine. I think it’s safe to say the photo above was likely taken sometime during that line of question from Battelle. Forbes editor Robert Hof transcribed what he could of the conversation here.

Data-Driven Secrets of Programmatic Publishers: Strategies for a New Era

As the CEO of Metamarkets, a real-time analytics company that is partnered with most of the behemoth programmatic publishers in the industry, Driscoll has an interesting perspective on monetization that he comes at from both the macro and micro apertures. Programmatic media buying is a market that is complex beyond belief, but when you compare the sheer amount of daily programmatic transactions to daily trades on the stock market, the vastness of programmatic is put into a whole different perspective. With that degree of complexity, it’s no wonder many publishers feel either paralyzed (“where do I start?”) or completely buried (“where the hell do I get budget for a programmatic specialists?”). To them, Driscoll shares his four secrets of successful programmatic publishers:

Mobile is About Now & Next

URX is one of the front-runners in the charge to revolutionize monetization, viewability and attention for mobile content through deep linking. Furthermore, mobile monetization is dominated by our friends Facebook, Twitter and Google as is the distribution of the content itself. Part of the problem is that desktop strategies can’t be shoe-horned into mobile. Mobile is fundamentally different, from form factor to contextual signals and even consumption patterns. Publishers must find innovative ways to make sense of the context of each of their pages in an approach that’s specifically designed for mobile. When you are reading a review of Dr. Dre’s newest album on Pitchfork, it doesn’t really make sense to be served a Dodge ad. What if instead, Apple Music served you an ad allowing you to purchase the hit single from the album?

Milinovich left the audience with this: “It’s going to take major collaboration for us to close the monetization gap. This isn’t a solution that any one of you can solve alone. This require publishers to band together.”

Beyond Viewability: Paying for Attention

Pandora has long been a leader in creating new approaches to monetization and advertising specifically. As a streaming radio company, they arguably face viewability problems more intensely than a traditional blog might. When you are streaming radio while you cook dinner with friends, you are unlikely to be actually looking at your computer screen to impress an ad. As the VP of Product at Pandora, Krawczyk has to make product development decisions that make users happy and accomodate their monetization goals. “Can we all agree that an ad that is viewed for 1 second is more valuable than one that is viewed for 0 seconds?” Krawczyk laughs.

“But what about an ad that is viewed for 5 seconds? Is that inarguably better than the ad that is viewed for 1 second?” Perhaps. But we as an industry are still figuring out how to get that 5 second mark. Krawczyk says the key is to create an advertising experience that actually asks people to pay attention. By listening to and focusing on what your readers want, you can begin to increase revenues while decreasing the number of ads on your site. Now you’ve got our attention, Jack.

Chris Mahl came prepared with some compelling statistics around the revenue impacts of poor video performance. Basically, you only have about two seconds to get your users on the hook. Any longer and they start abandoning your content in droves. Beyond that 2 second mark, every 1 second increase in delay results in roughly a 5.5% increase in abandonment rate. Dark Social Matters: Harnessing Channels That Only Exist in Theory

I don’t know if you are as much of a Star Wars weirdo as I am, but if you are, Matt Thomson would definitely have won your heart at i². “I always try to get a Yoda slide in all of my presentations.” Like Yoda, Bitly is battling some dark forces. As a link shortening and analytics company, Bitly has unparalled insights into how users are sharing and consuming content when they aren’t technically online. This phenomena is referred to as Dark Social, and the amount of traffic coming from these “unknown” sources is much larger than most publishers might think. If you have been following the media about adblocking and anti-adblocking of late, you’ve likely heard about Sean Blanchfield and his company, PageFair. Along with Adobe, PageFair put out an eye-opening report on the global state of adblocking that set the digital world ablaze. The punchline of the report? Adblocking is on the rise, not only in the US but globally, and there is no end in sight. In fast, with the release of iOS9, adblockers are expect to drastically penetrate the mobile market through the end of this year and into 2016. The good news is that companies like PageFair and their allies are banning together to create solutions to help publishers reclaim revenue lost to adblockers. Blanchfield’s main tips for publishers at i²? You have to win on your first move, and fight trench warfare at all costs. But most of all, create an advertising experience on your website that is pleasing to your visitors!

The tables were turned at the afternoon interview session when John Battelle took the hot seat on the i² stage. As the Founder of multiple digital empires including Wired Magazine, The Industry Standard, Federated Media Publishing, Web Summit, and his newest venture, NewCo, John has many insightful perspectives about content creation, monetization and the future of publishing. Despite, or perhaps because of, his back-to-back successes, Battelle is a strong advocate of publishers large and small. He is an advocate for the strengthening of online communities, fighting for publishers to think about their readers first as the key strategy for success. Here are a few tweets from the talk:

“I don’t want to be a sharecropper on Zuckerberg’s farm.” –@johnbattelle on why he believes content/ads belong on the open web #isquared2015 — Jenna Cole (@jennacole) September 9, 2015

John Battelle at #isquared2015: Apps aren’t a full expression of how we interact. You don’t put ‘em into little chiclets on a screen. — Robert Hof (@robhof) September 9, 2015

Talk about a panel full of marketing heavy weights. The conversation jumped from audience and consumer data, to viewability, engagement, mobile, data economics and of course, adblocking. Instead of trying to transcribe this incredible deep dive into marketer and consumer economics, I encourage you to watch the full panel session here.

From Keynote to Keyboard: What TED Can Teach Us About Content Creation

As Executive Producer at TEDxCambridge, Tamsen selects presenters from a diverse group of thinkers, artists, inventors, entrepreneurs, writers, scientists, and teachers—the only common thread being the gravitational pull of their ideas, and their desire to share them on the TEDx stage. In addition to coaching the speakers in their presentation development, she also serves as the emcee for each live TEDxC event. Webster wrapped up the day with a keynote all about content. That is, what can some of the most successful TED Talks teach us about connecting with an audience and communicating an idea that moves them? Hint: it all starts with the audience.
Drawing from Joe Smith’s infamous TED Talk, “How To Use a Paper Towel”, Webster walked the i² audience through the foundations of Smith’s message and what made his simple talk about a not-so-interesting subject so universally powerful. 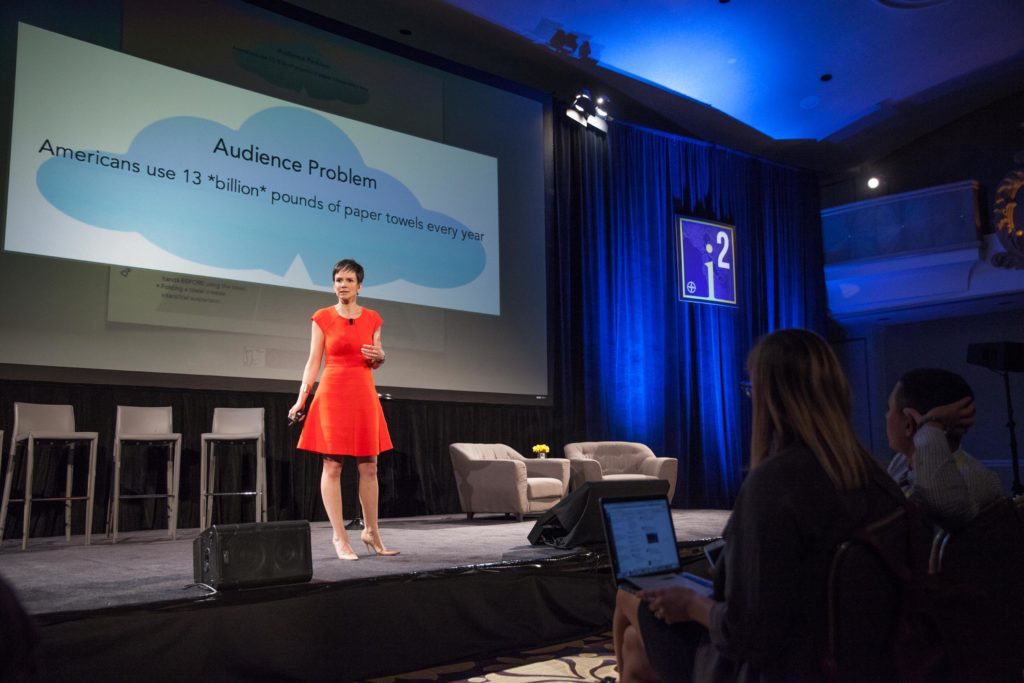 Want to know her secret formula?
RIGHT CONTENT + RIGHT SEQUENCE + RIGHT ENGAGEMENT
Targeting, timing and delivery. It’s the sauce that all successful TED Talks and digital publications have in common.

You’ll have to wait to find out 🙂
Want to see all of the i² talks in their full-length glory? Stay tuned as we release the event footage throughout the September!